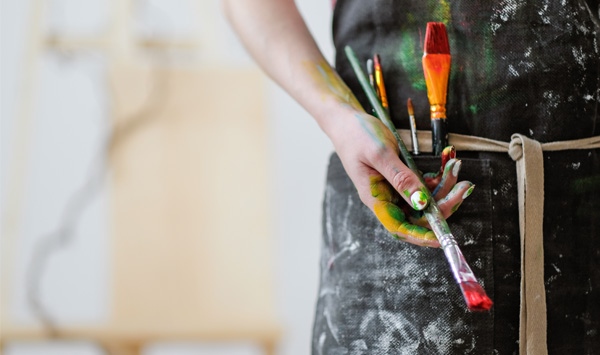 Things To Consider Before Going To Art School

When I made the decision to go back to school, I wasn’t entirely sure what I wanted to do. All I knew is that I wanted to do something I felt passionate about. Technology, food, and art were the important things in my life, and one of them was going to inform my direction.

I had a friend who was preparing to go to a prestigious art school in British Columbia, and it helped inform my own decision-making.

“Go off to school and become an artist,” I said.

If only it were that simple. It wasn’t until I had gone and done it that I realized the things I hadn’t factored in at the beginning.

Of course, jobs aren’t guaranteed regardless of where you go, but art school is exceptional in what it takes to find work.

Art is incredibly subjective, and employers want someone they feel will fit in with their branding and creative vision. Everyone’s style is different. Applying for jobs as an artist involves a lot of rejection.

Working as an artist often means working independently. It requires a lot of determination. I spent years working freelance roles, which allowed for a lot of independence, but also meant jobs and income could be wildly inconsistent. Money often came in fits and spurts, which meant needing to stay on top of my budget and having savings for when times were lean.

The Competition is Fierce

There are jobs out there.

For every art program student, there is a corresponding role out in the real world. I went to school for photography, and there were tons of freelance jobs and gigs—but there were full-time roles as well. These were mainly positions within media, ad agencies, and even some in-house marketing departments.

Employers know that job openings are competitive and creative services are usually undervalued, and it’s one of the first roles they look to outsource to save on money. It’s important to know your value.

Competition for full-time jobs is fierce. For every opening, there are often dozens of other applicants.

Standing out from the competition can be hard, and it can be demoralizing. I went through long bouts of self-doubt. Overcoming these feelings can be one of the hardest things to do.

Ultimately, what I learned is that my competition also went through the same difficult process. It’s part and parcel of wanting to become a working artist. It takes time, persistence, and developing your own brand.

No matter what hurdles you face along the way, never stop producing art. You’ll also learn additional marketable skills along the process, and it’s okay to take a job that builds the skills you need for your dream job. Like your art, working as an artist is a process unto itself.

Art School is a Lot of Work

Don’t go to art school if you think it’s an easy ride. It is not.

Art school was one of the most difficult things I have ever done. My first year was spent splitting my time between the academic side of the program and the studio. I would have loved to just work in the studio, but it’s just not the reality of art school.

I can’t count the number of 16- and 18-hour days I had in my first year. Each class would have its own paper or project. Working across media and styles was challenging, and there were times I thought about quitting.

It got easier as the semesters wore on. Whether it was because the work load lessened, or because I became more concentrated across my projects, I was able to focus on what I was passionate about and remember why I had wanted to go to art school in the first place.

Anyone who suggests art school students are taking the easy way out simply don’t know what they are talking about.

It Can Be Expensive

Like other specialized training, art school can be expensive. It can involve higher tuition costs, and sometimes moving to a city with an art school means moving away from home and taking on higher living expenses.

On top of it all, every program at art school comes with ancillary costs—and it can really add up. Even if you just want to draw, specialty papers and art tools can get expensive. Computers for animators can cost thousands of dollars, and so can cameras for photographers.

Fortunately, there are many great free software packages and older versions can cost much less while still helping you learn the fundamentals of the tools.

There are ways to cut costs, especially if you get creative with it.

My classmates and I knew all the great spots to find unwanted or discarded materials. We shared contacts at metal shops, lumberyards, and clothing and textile producers. There is nothing wrong with off-cuts or bolt ends.

Don’t be afraid to ask for help.

The Critique is Your Most Important Tool

Critiques were probably the most frightening part of art school.

It’s the time when you find out what others think of your work. There was often a bitter sting when someone said they didn’t like what I had produced. It was the same for them. Just know that it’s not personal.

Critiques are important to your development as an artist, and not necessarily in the way you think.

Giving a critique can be a daunting experience, and I found that many of my peers would just say nice things because they didn’t want to hurt someone’s feelings. They missed out on what I find is the most important part of giving a critique. You can learn a lot about your own work by giving feedback to others.

Of course, delivering a critique effectively is an art unto itself. It’s not enough to say you don’t like a work or some element of it, it’s important that a critique is constructive and communicates why something doesn’t work. I always found it easier to bookend my critiques with the things I thought worked well.

Critiques are essential to an artist. Don’t fear them.

I won’t say that art school is for everyone. It’s not, but it was for me.

Looking back, there were a lot of reasons not to go. But had I known then what I know now, I would have made the same decision.

I miss my time at art school, and I don’t think it would have been the same in another school. I learned some skills that I could not have picked up anywhere else.

I developed the ability to collaborate with others, regardless of the medium they worked in. Everyone I worked with had different technical knowledge, and brought their own strengths to our groups. I’m mostly an introvert, so working in a group was a challenge at first. Nevertheless, some of the best projects I worked on were collaborative ones.

My passion made me more committed to my success. I put in the extra work. I immersed myself in technical manuals for the tools I used on a daily basis. I worked with instructors and peers to better understand classic processes and the overall evolution of art.

In order to be successful as a creative, you need to immerse yourself in your craft. Whether you’re studying graphic design, learning to use architectural programs, or designing clothes, it takes constant experimentation. It’s easier to do so in a safe environment like VCAD than when you have the weight of the world on your shoulders.