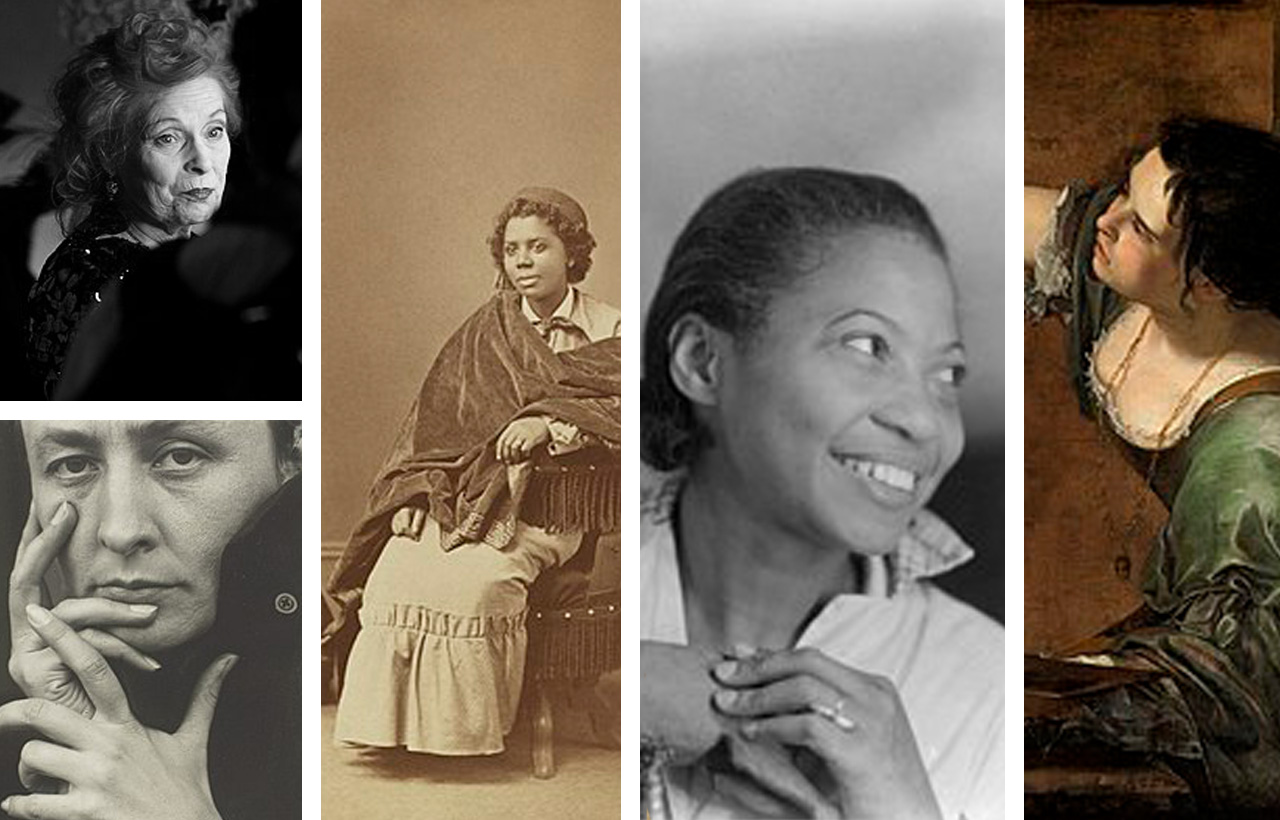 From painting to photography, women over the ages have made outsized contributions to the evolution and practice of fine art. Even though some were lost to history, or unjustly overshadowed by their male counterparts, art would not be what it was without the influence and work that women have made.

These five women represent 400 years of contributions to the world of painting, sculpture, and fashion. They shaped the times in which they lived, and helped to define the styles and mediums in which they worked to this day.

Even though she had a successful career in her lifetime, and achieved international renown, following her death Artemesia Gentileschi languished in relative obscurity until the 20th century and is now regarded as one of the most important artists of the Baroque.

Gentileschi’s work centers on strong, sometimes vengeful women. Savage depictions rooted in biblical allegory weren’t uncommon during the Baroque, but her paintings exhibit a skill and passion that exceed those of her male counterparts. Even her own self-portraits stand apart, representing Gentileschi honestly, instead of an idealized version of the artist as nobility.

In social life Gentileschi presented herself with ferocity and determination, describing herself as having the “spirit of Caesar in this soul of a woman.” It was this combination of skill and tenacity that earned her the patronage of influential art families like the House of Medici, and the support of royalty like Charles I of Britain.

Even though her fame faded after her death and the decline of the Baroque, she found resurgence with the feminist movement of the 1960s and 70s. Today Gentileschi holds a seat at Judy Chicago’s iconic 1979 feminist art installation The Dinner Party, and her influence continues to be felt in the works of Yoko Ono, Marina Abramovic, and other contemporary artists.

Stylistically conscious, the sculptor Edmonia Lewis was well aware of the role that both race and gender played in the art world of the late 19th century. Women were largely seen as outsiders, and a black woman sculptor was virtually unheard of.

Lewis’ work is known for her incorporation of her African American and Ojibwe background, ranging in subject matter from abolitionist heroes and black liberation to indigenous legend.

Although she garnered some success in the United States, it wasn’t until she moved to Rome that she found greater acceptance along with more social and artistic freedom. She began to produce larger scale work with more socially-minded themes, and ultimately found mainstream success.

In her time, she wielded great influence over the art world and challenged the perception of both race and gender. Many of her works have been lost to time, but her importance remains certain. She has been honoured on stamps, in novels and stage plays, and is the namesake for the Edmonia Lewis Center for Women and Transgender People at Oberlin College.

The mother of American Modernism, Georgia O’Keeffe’s work is synonymous with American culture through the middle part of the 20th century.

O’Keeffe knew from an early age that she wanted to take a direction in art, but it wasn’t until she studied the ideas of Arthur Wesley Dow that her own style began to take shape. Her work broke with the traditional techniques and styles she learned at art school and took on an expressive form that was rooted in interpretation and personal feelings.

While many of her art pieces deal in abstraction, her work never failed to capture the essence and the emotion of her subject, which is particularly present in her 200+ paintings of flowers. However, O’Keeffe’s work was diverse; she approached each painting with the same passion and energy, whether it was a flower, a New York skyscraper, or a New Mexico landscape.

Despite losing her vision in later life, O’Keeffe continued to paint with the help of assistants. “I can see what I want to paint,” she stated in 1977, “The thing that makes you want to create is still there.”

Her legacy and influence continue to this day. Her accolades include a Presidential Medal of Freedom, a National Medal of Arts, and she even has a dinosaur named after her! She has influenced countless artists during and after her time, and also holds a place in Judy Chicago’s The Dinner Party. She remains one of the most influential artists of the last century.

Augusta Savage was a sculptor of incredible talent. She embodied the struggle that black artists have historically dealt and are still dealing with today, where talent and vision are at odds with financial limitations and cultural barriers.

Despite these challenges, Savage found moderate success during her lifetime, and made huge impacts on her community through her dedication to art. She moved to New York in the 1920s to attend Cooper Union—a well-known art school—where she completed a four-year program in three years.

Savage’s sculptural work captured the intrinsic nature of African American culture in the United States. Her career began during the Harlem Renaissance—a time of cultural revival of African American music, literature, and art—producing primarily clay sculptures and plaster casts as she could not afford to cast in bronze. Her masterwork, The Harp, a sixteen-foot tall sculpture that portrayed black spiritual singers as the strings of a harp, was shown at the New York World Fair in 1939.

While the majority of her work was destroyed, including The Harp, her legacy lives on beyond her physical art. During her life she founded an influential school in Harlem and worked to support students learning about art. She was also accepted as the first African American member of the National Association of Women Painters and Sculptors. Today multiple schools are named in her honour, and her home in New York is listed on the National Register of Historic Places.

Few people have defined the style of a generation more than Dame Vivienne Westwood. Working in partnership with Malcolm McLaren at their clothing boutique SEX, she worked as a tastemaker to some of the biggest names in punk in Britain in the 1970s, including the Sex Pistols.

But her association with punk music and style didn’t happen by accident. From the outset she decided that she wanted to “throw a spoke in the system.” She managed to turn aggressive, anti-social fashion looks into a statement consumed by the masses. By the end of the 70s, studded leather and torn t-shirts had transformed from counter-culture to enter the mainstream.

Her influence continued throughout the 80s as punk transformed into New Wave. Her designs maintained their edge and stood apart from more traditional fashion designers as she influenced pop culture icons like Madonna and Cyndi Lauper.

Despite her contributions to punk and New Wave street styles, Westwood’s fashion was transcendent. Even when it was aggressive, edgy, and made for the underground, her work still maintained the status of high art. Her designs had a profound impact on the culture of her time, and her influence is still seen today. Westwood still produces new fashion through her self-titled clothing label, and had a clear impact on the designs used in Disney’s live-action film Cruella.

These five art icons are just a sampling of the hundreds and thousands of women who have influenced the direction of art throughout history. Women have produced art since the beginning of cultural records, from ancient stone fertility sculptures to modern-day pop culture and music videos.

While the arts have not always been kind or easy for women, the contributions they have made in spite of it are undeniable. Women have advanced the production of art, developing and improving techniques, and defining styles. Without them the worlds of art and culture would be different, lesser, and lacking.

It’s important to make an effort to ensure that the next generations of women artists are recognized and celebrated for their contributions.